With Midnight in a Perfect World officially released next week by Sibling Rivalry Press, here's a Spotify playlist of the songs and music that inspired and informed the poetry in the collection. There are tunes by Joni Mitchell, Kate Bush, Marianne Faithfull, Iggy Pop, Kylie Minogue, T. Rex, Miles Davis and, of course, DJ Shadow.

Midnight in a Perfect World - DJ Shadow: Insight, foresight, more sight - the clock on the wall reads a quarter past midnight. So begins DJ Shadow's epic slice of trip-hop built on a plethora of samples including the opening words from Organized Konfusion. I first heard this dreamy song from Shadow's debut, Entroducing..., in 1996 on my second visit to London. It remains one of my favorite pieces of music and its mood informed the entire collection.

Take to the Sky - Tori Amos: From Tori's 1992 Little Earthquakes album, the poem "Feast" references the title of this song. The lyric "You can say it one more time, what you don't like... then have a seat while I take to the sky" encapsulates the spirit of the poem perfectly.

Nothing Can Be Done - Joni Mitchell: From Joni's 1989 album Night Ride Home, which inspired the poem of the same name and includes a line from this song. The lyrics are some of Joni's finest: Must I remember your face, so well, what do I do here with this hunger. Oh, I am not old, I'm told, but I am not young and nothing can be done.

20th Century Boy - T. Rex: The energy of the song itself and the person who inspired the poem (hi, Ken!) are forever linked in my mind.

Strange Weather - Marianne Faithfull: The poem of the same name begins with an epigraph from the tune written by Tom Waits, which has become a Faithfull standard. The melancholy torch song is the soundtrack to the doomed love affair depicted in the poem.

Wuthering Heights - Kate Bush: The song and music video are referenced in "Kate Bush Appears on Night Flight, 1981." The song appears on Kate's 1979 debut album, The Kick Inside, but it would be 1981 before I discovered it on the old music show, Night Flight.

I Should Be So Lucky - Kylie Minogue: Kylie's first big hit song in 1987 came out when I was a junior in high school and I've been a fan ever since. A dream version of Kylie appears in the poem of the same name, which also includes a reference to another of her big hits, a cover of "The Loco-motion."

Superstylin' - Groove Armada: This hybrid of dancehall, reggae and dub by British group Groove Armada is referenced in the poem "What I'm Wearing."

Dark Space Low - Twin Peaks soundtrack: Angelo Badalamenti's dark composition are intrinsically linked to David Lynch's series. Listen to this while reading "Another Monica Bellucci Dream," which was inspired by the recent revival of the series.

This Is Not America - David Bowie/Pat Metheny Group: This pop/jazz fusion classic is the mood for the second section of the book, which moves the action to London.

The Poet Acts - The Hours soundtrack: Virginia Woolf appears several times in the collection including "In Tavistock Square" and "The Voyage In." This gorgeous instrumental by Philip Glass from The Hours (which features Nicole Kidman's Oscar-winning turn as Woolf) and the entire soundtrack informed the poems.

This City Never Sleeps - Eurythmics: This song perfectly captures the feel of London at night. It doesn't correspond to a specific poem, but is another mood setter for the second section. I guess it's just a feeling...

By Piccadilly Station I Sat Down and Wept - Tracey Thorn: The heartbreak and wistfulness of lost love is palpable in this song. It corresponds to the poem "The Comedown."

Books - Howards End soundtrack: Howards End is referenced in the poem "Atonement," which references the film of the same name. Both films are based on classic books - two of my favorites. The "Atonement" poem is the hinge-point of the collection. I still can't read it aloud without becoming emotional. The poem is for Christopher Jason Siddons, who this collection is dedicated to.

Crazy English Summer - Faithless: Summer returns and puts you back on my mind... This electro pop tune is the sound of the poems"The Turf" and "English Pastoral."

Everything is Beautiful - Kylie Minogue: Let's go through the ritual until everything is beautiful... Read the poem "Ritual" and then listen to this song. It will forever remind me of the summer of 2010 in Oxford, England and of a man who brought me back to life.

The Passenger - Iggy Pop: When you read "In the afterlife my father is a London cab driver," this might not be the first song that springs to mind, but I can't hear it now without thinking about my sweet Daddy-O making one final appearance. I am the passenger and I ride and I ride. I ride through the city's backside, I see the stars come out of the sky...

'Round Midnight - Miles Davis: Big, big, BIG mood for the collection. It corresponds to the collection's title poem. Imagine standing in line at midnight in a supermarket after a long day and swaying to this -- happy, exhausted and home at last.

Midnight in a Perfect World (Extended) - DJ Shadow: A reprise of the song, which opens with the sound of Big Ben chiming midnight. Quintessential London. 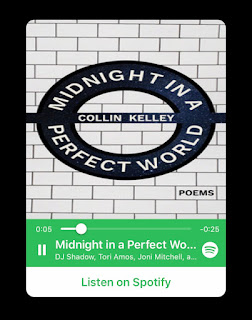