In the Castro with Karl Tierney 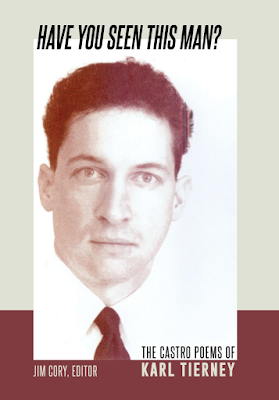 I discovered the unique voice of Karl Tierney in the anthology Persistent Voices: Poetry by Writers Lost to AIDS published in 2010. Karl had already been dead for 15 years, having taken his own life in 1995 after his diagnosis the year before. He was only 39 when he walked to the center of the Golden Gate Bridge in San Francisco and jumped into the bay.

Karl's work could have been lost if it were not for a dedicated group of friends, writers and editors who refused to let his poetry disappear. Their efforts over the last nearly quarter of a century has culminated in the publication of Have You Seen This Man? The Castro Poems of Karl Tierney, which will be published in October by Sibling Rivalry Press (you can preorder the book at this link). Editor Jim Cory has done a spectacular job of assembling the work into a posthumous collection that, I have no doubt, would have made Karl very proud. As usual, Sibling Rivalry publisher and editor Bryan Borland and Seth Pennington have done a beautiful job with the design and layout. Sequenced chronologically from 1983 to just before Karl's death in 1995, these poems are a snapshot of life continuing even as a plague ravaged San Francisco.

The poetry is funny, catty, bitchy. Some of it is overripe, some just slight, but there’s a fierce passion for poetry and writing that is unmistakable here. At the end of the '80s, there is a shift in skill. The poems are often more dense, the language is heightened and more assured. Karl never had trouble getting his work published; 50 poems published in journals, magazines and newspapers over the course of a decade is impressive. The editors obviously recognized what is so tangible in these poems: a keen eye for detail, of time and place, knowing how to strike a balance of darkness and light, and “soldiering on” in the face of AIDS.

One of my favorite poems in the collection – since I also mine pop culture for images and inspiration – is "Mission Dolores." That's the church in Vertigo where Jimmy Stewart follows Kim Novak when she leaves flowers on the grave of Carlotta Valdez. The poem not only summons up Hitchcock and Novak, but Dusty Springfield, Pet Shop Boys and Bridget Bardot, while noting that the '80s have become reminiscent of the '50s for the fearmongering and dread. Let's not forget that it was nearly a  decade into the plague before President Reagan even uttered the word AIDS.

The mythology derived from the symbol might be an illusion
but not the reality in the fact that Thank God and thank you
General Motors Cadillacs are getting bigger again
so that this dreadful era becomes reminiscent of the '50s
as if escape were indeed possible
as I walk by the Mission's garden and all at once a stiff breeze
affects even my pompadour stiff with pomade
and from out of the fog a long black Cadillac passes me by
and I needn't wonder if inside the body is still alive.

That poem was written on my birthday, Sept. 17, in 1989. It's just another incident of synchronicity and a sign from the other side as I begin compiling my next manuscript, which focuses on my late uncle, Terry Graves, his time in San Francisco and his death from AIDS just a year before Karl. Terry and Karl were in San Francisco at the same time, and I can't help but wonder if they encountered each other. Maybe in a poem they will.

I have a love/hate relationship with San Francisco, but I've been feeling the need to return. Urgently. And Karl's poems only solidified that. It's amazing when poetry can move and motivate you enough to want to travel across a continent. That's what Karl Tierney's work will do for you.

Manning Harris said…
Thanks for this lovely, sad piece, Collin. Karl makes me think of my late, beloved cousin Buddy, who died in 1991 of "natural" causes: AIDS. He was only 42; not a poet, but a doctor. His life was his poem. I look forward to reading Karl's book.
11:22 PM

Idn Theme said…
Thanks for this lovely, sad piece, Collin. Karl makes me think of my late, beloved cousin Buddy, who died in 1991 of "natural" causes: AIDS. He was only 42; not a poet, but a doctor. His life was his poem. I look forward to reading Karl's book.
10:37 AM