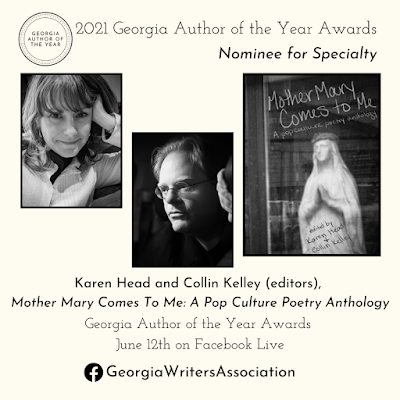 I haven't made an update here since February, but there hasn't been much to say. And that's not a bad thing.

Work continues on compiling and sequencing the new & selected volume, I've got a few poems out at literary magazines, and I've significantly pulled back on posting on all of my social media accounts (it's been a breath of fresh air). I also decided to opt out of accepting any invitations for readings during the almost over National Poetry Month.

My head and iPhone notes app are filled with lines in search of a poem to plug them into, so that's always a gift from the inspiration goddess. But, honestly, I feel like the "poetry hiatus" I wrote about at the end of last year has already begun.
As I've been preparing more boxes for my archive at Georgia State University, I came across a notebook with a few more sketches for my long-simmering collection of short stories set in the fictional town of Cottonwood, GA. Some of you will recall that the first four stories were published back in 2012 in an ebook called Kiss Shot. I've been wanting to complete the long-form version for years, so the time is now.
There's a few other things going on behind the scenes, including a nagging health issue and the condo search. I hope to have some resolution on both in the coming week, so expect another update soon.
Meanwhile, Mother Mary Comes To Me is officially a nominee for a Georgia Author of the Year Award. Winners will be announced in June, so fingers crossed. While Karen Head and I are the designated nominees, this anthology would be nothing without the contributors, so the nomination and the award – fingers crossed – will be theirs.
More very soon.
Email Post
Labels: anthology Fiction Georgia Author of the Year Award Mother Mary Comes To Me National Poetry Month Poetry writing