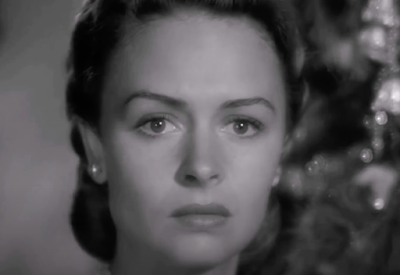 What Mary Bailey Saw
–  It’s A Wonderful Life (1946)
A deep, old fear usually hidden behind a benevolent face now out in the open and running wild. Eyes darting, panicked mouth, last rope clutching at the children then scaring them with upended dreams and tables.
Here’s the rage that’s been building inside old mossback George since he went in the water to save his brother and got a trick ear reward. Enough resentment to fill a thousand and one steamer trunks that never left the station. Italy, Baghdad, Samarkand, and Bermuda became mirages in the face of marriage and bank runs. He said he never wanted to get married — ever! — or have all those kids, get tied down in a crummy town he’d never spent a night away from.
But this Buffalo Gal wasn’t taking no for an answer. She made up her mind young, could see the world would swallow George up and spit him out, that he’d never find his way home. Let him think he lassoed the moon, paint it cute and hang it on the wall of the crumbling dream house, and behind it hide the loadstone the angels hung around his neck at birth.
The stars line up to talk about him, send some odd body looking for a break to pull him back from the edge. But George is Yankee stubborn, so the only way to make him understand his place is to erase him from it. Watch the town fall under the sway of an inherited mortal enemy, his father’s worst nightmare come to pass, as the once bucolic streets run with all-night liquor, Girls, Girls, Girls! who’ll jitterbug for a dime. And Mary becomes a nervous spinster, shrieking at the touch of a strange man who wears the face of her dream husband.
Mary knows George would never understand they live in a snow globe that gets taken out and shaken once a year. That the life he’s been longing to escape has a finite border, and for a moment, as he clutches Tommy to his chest and Janie plonks away at the piano, he knows it too. This place where it’s always Christmas Eve, where the difference between life and death is $8,000 dollars that always goes missing and returns tenfold, and Zuzu’s sinister flowers bloom in the wintertime. Quick! Ring a bell.
Email Post
Labels: It's A Wonderful Life New Poetry Project poem Poetry